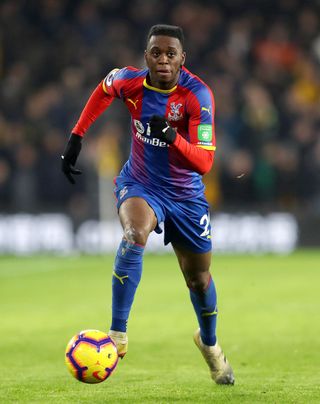 Ole Gunnar Solskjaer’s side are looking to kick-start their summer rebuild by signing the talented 21-year-old right-back, having so far only brought in Daniel James from Swansea.

It is understood progress was made during talks between United and Palace on Tuesday, with Wan-Bissaka now looking set move to the north west.

The agreed deal is understood to be for an initial £45million, plus another £5million in add-ons.

Wan-Bissaka was part of the England squad that exited the Under-21 European Championship in the group stage last week.

The right-back endured a difficult time in Italy, where Aidy Boothroyd overlooked him for the Young Lions’ last two group matches after his late own goal in the opener against France led to a 2-1 loss.

The Under-21s boss believes Wan-Bissaka’s error in that match may have been down to the ongoing speculation about his club future.

“For a young player who all he knows is Crystal Palace academy and Crystal Palace it would be daft not to say that in some way he must think about it,” Boothroyd said.

“I would not be truthful if I told you anything other than that. What I will say is because he doesn’t say too much you don’t get to find out too much. Aaron keeps things to himself.

“He is a very private guy. When that speculation is flying around it is bound to turn your head. But having said all of that had he not scored the own goal we probably wouldn’t be having this conversation.”

England Under-21s’ return from the finals will make it easier for Wan-Bissaka to complete his United medical and put pen to paper.

It is a big fee for a player yet to make his senior international debut and only made his first appearance for Palace 16 months ago.

The 21-year-old also collected the PFA Community Champion Award at the end-of-season awards in May, when he committed his immediate future to Palace.

“The situation just shows that my performances don’t go unnoticed,” Wan-Bissaka told Standard Sport. “But I am with Crystal Palace at the moment. That is where my contract is and that is where I will be next season.

“I have got three years left on my contract. It says I am going to be there, so that is all I can focus on now.”