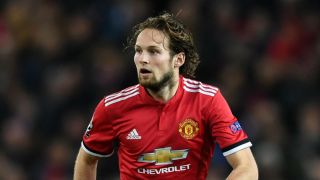 Daley Blind is interested in leaving Manchester United for Roma, although a deadline-day switch to Serie A looks unlikely as Jose Mourinho is unwilling to lose the versatile Dutchman.

Blind made 39 appearances in all competitions last season for United, but he has only started three games in the Premier League this term.

He played every minute of United's Champions League group campaign, however, Mourinho's men topping their pool to book a last-16 meeting with Sevilla.

Roma are on the hunt for a left-sided player after selling Emerson Palmieri to Chelsea and the Netherlands international's father Danny says a switch to the Italian capital would be favourable, but played down the chances of a deal going through.

"Time is running out because it's the last day of the transfer window," Blind Sr told LaRoma24.

"I can confirm that Roma want him but Manchester United don't want to let him go on loan, only on a permanent basis in the summer.

"It's really difficult [to negotiate a move] because Manchester United want to keep him to play in the Champions League, the Premier League and the FA Cup.

"Italy would be an interesting choice for him, but Manchester United is a huge club that doesn't need to sell players and doesn't need the money.

"Mourinho wants to keep this group together. Maybe if we had a few days, a week perhaps [a deal would be possible], but we've only got a few hours, so it's really very difficult."