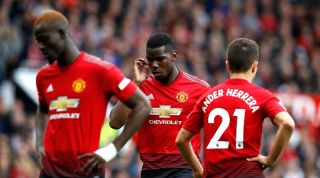 Manchester United players will suffer a wage cut of up to 25% after their failure to qualify for the Champions League, report Sky Sports.

The club have adopted a policy of rewarding squad members for reaching Europe's elite competition, and United's inability to do so this term will lead to a drop in salaries across the board.

The exact proportion of the wage varies depending on the details of each player's contract, but some will see their pay packet reduced by a quarter.

And while the clause is not present in many of the deals that were signed a few years ago, the majority of United's squad can expect to earn less as a result of their failure to finish in the top four.

Ten victories in Ole Gunnar Solskjaer's first 12 games in charge lifted the Red Devils back into Champions League contention, but a recent four-game winless run means they can no longer finish higher than fifth.

United conclude what has been a disappointing campaign with a home match against Cardiff on Sunday.

Andy Mitten column: At Manchester United, things are very bad - and could get worse