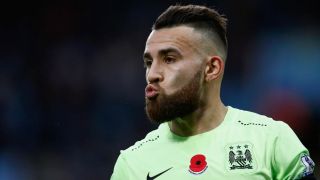 Manchester City defender Nicolas Otamendi has stressed that he was never close to joining the club's close rivals United ahead of the 2015-16 campaign.

The Argentina international was heavily linked with a move to Old Trafford during the close-season, with Louis van Gaal reportedly earmarking him as the ideal addition to his back line.

However, United eventually missed out on Otamendi's signature as he left Valencia for City instead.

The 27-year-old has now clarified that a transfer to United was never as close as it was suggested at the time, making it clear Van Gaal's side did not make a formal approach.

"It was just rumours about United," Otamendi told The Independent.

The centre-back has developed into an integral part of City's first team since joining them in late August.

Otamendi has made 22 appearances in all competitions under manager Manuel Pellegrini so far, scoring once in the process.