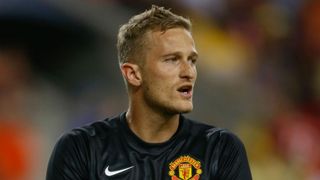 Pogba signed a five-year deal with United this week after Juventus accepted a bid reportedly close to £93million for the 23-year-old.

The transfer, which eclipses the previous record fee paid by Real Madrid to lure Gareth Bale from Tottenham in 2013, has taken United's spending to upwards of £150m in the current window alone, following the signings of Eric Bailly, Henrikh Mkhitaryan and the free transfer of Zlatan Ibrahimovic.

Lindegaard, who spent five years at United and now plays for Preston North End, says the change in mentality of his old club is indicative of the state of the modern game.

"This is definitely a new chapter," he told 888sport. "United are a different club to when I was there. It's run in a different way and built on different values.

"Unfortunately this is just a natural development with how football is going and it doesn't change my feelings for them.

"Everything is about money and I know United have spent a lot of money over the past decades, which is a big part of why they're so successful, but it's just getting more and more extreme. You can't prevent it so I guess you just have to embrace it and do as well as you can in that environment.

"It is reality and only going in one direction. Journalists will ask these same questions in five years when players start costing a quarter of a billion. It is what it is and it's the direction of modern football."

Lindegaard does believe that Pogba will be a hit having rejoined his old club, however.

"He's a great player. I've played with him myself at Manchester United and he was an obvious talent. I'm happy for the club because it's a great signing for them and I'm happy for Paul that everything went through," he said.

Lindegaard struggled for first-team football during his United career, with Edwin van der Saar and then David de Gea commanding the number one spot for the majority of his time at Old Trafford.

But the 32-year-old says he is proud to have been a team-mate of Spain star De Gea, a goalkeeper he considers to be one of the finest in the world.

"He is up there, definitely," he said. "I'm really happy that I've had the pleasure of playing with him and to see his development. He's not only a great goalkeeper but a really nice guy.

"To label the best goalkeeper in the world is down to your preferences of how you want a goalkeeper to be. He is very different from Manuel Neuer, or [Hugo] Lloris, Petr Cech or [Thibaut] Courtois. So he's got aspects of the game where you can say he is definitely the best in the world.

"He is mentally very strong and pulls off some fantastic saves. In those two areas he is the best and will only get better in the next ten years."

Read the full 888sport interview with Anders Lindegaard, including his thoughts on Paul Pogba being a perfect fit for Man United