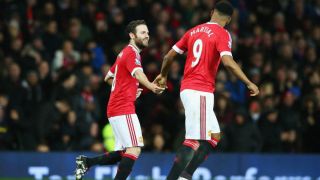 Juan Mata is happy to embrace the pressure at Manchester United as they look to get their Premier League campaign back on track against Stoke City.

An atmosphere of frustration at Old Trafford turned positively toxic when Charlie Austin headed home a late winner for Southampton last Saturday to end United's five-game unbeaten run in all competitions, and leave them with just two league victories in two months.

That 1-0 defeat has left Louis van Gaal's side five points adrift of the top four and created further speculation over the manager's future, prompting a furious reaction from the Dutchman to the press reports in the past week.

Pressure on Van Gaal was lifted somewhat on Friday as United dispatched Derby County 3-1 to move into the fifth round of the FA Cup, and Mata - who scored the final goal at Pride Park - hopes to see his side handle the demands of the crowd when league duties resume.

"When you play for Manchester United there's pressure on every game," he said to MUTV. "You have to win every game and I think we managed the pressure.

"We played good football, and now we're looking forward to the next game on Tuesday in the Premier League."

Stoke recorded a comfortable 2-0 win against United on Boxing Day but their promising form has taken a dip since the turn of the new year.

Defeat at Leicester City - which marked their second successive away league loss - preceded bitter knock-out disappointment this week, as they were beaten on penalties by Liverpool in the League Cup semi-final before exiting the FA Cup at the hands of Crystal Palace on Saturday.

"It's been a difficult week for us all to be perfectly honest," manager Mark Hughes, who will take charge of his 100th league match in charge of Stoke on Tuesday, told their official website.

"I can't fault the players' effort, they gave it a real go [against Palace], but we just lacked that quality that we needed."

United hope to have Bastian Schweinsteiger back from knee trouble and Matteo Darmian is recovering well from a heavy collision against Southampton, but Phil Jones, Antonio Valencia (both ankle), Ashley Young (groin), Luke Shaw (leg fracture) and Marcos Rojo (shoulder) are out.

Stoke's hopes of recording a first league win at Old Trafford were dealt a blow when Marc Wilson suffered a knee injury, which Hughes fears could keep him sidelined for some weeks.

With captain Ryan Shawcross (back) and Charlie Adam (calf) out, and doubts over Marko Arnautovic (back) and Geoff Cameron (ankle), Hughes' hopes of ending an eight-game losing streak away to his old club appear to be slim, despite United's own problems.