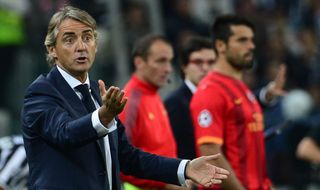 The former Manchester City manager has been touted as a potential successor to Cesare Prandelli, with reports suggesting the current national boss could step down after next year's FIFA World Cup.

However, Mancini, who took charge of the Super Lig champions in September following the departure of Fatih Terim, refused to comment on the speculation.

"Right now I don't want to talk about a potential future with the Italian national team," he said.

Mancini did however suggest he would be interested in returning to Sampdoria - a club where he spent 15 years as a player.

"Sampdoria has always had a special place in my heart and I believe this is normal.

"Let's see if there will be a future with Sampdoria. You never know what can happen in your life."

Mancini spent seven years managing in Italy, with spells at Fiorentina, Lazio and Inter, before he took over at Manchester City in 2009.