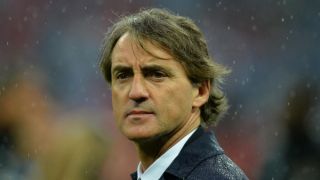 Having drawn 3-3 in the first leg, Inter advanced to the last 16 thanks to Fredy Guarin's stunning late goal at San Siro on Thursday.

Celtic had made a bright start, Gary Mackay-Steven seeing an early chance saved by Juan Pablo Carrizo, before the visitors had strong penalty appeals waved away when Stuart Armstrong went down under Davide Santon's challenge.

Inter's task was made easier when Virgil van Dijk was sent off nine minutes prior to the interval, but Mancini still feels there is plenty of work for his side to do.

"There was a big risk at the start, as a goal then would change the game," he told Mediaset.

"With the red card, it became easier. We are getting better, but still make mistakes in every single match.

"When we don't make mistakes any more, then we can say we're better.

"We should've scored earlier to relax into the game. We must improve in every respect. We are making progress and will try to run fewer risks in defence, ensuring the midfield protects them more.

"Celtic were more locked down today and didn't allow us the same spaces we had in Glasgow.

"When they attacked, we weren't quick enough to cover the gap between midfield and defence, as Hernanes and Guarin stayed too far forward."