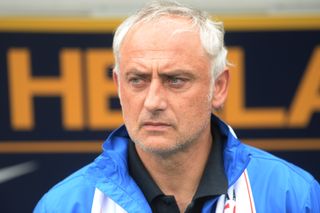 Mandorlini's team had conceded eight goals in their five previous matches heading into Saturday's clash at the San Siro and continued to struggle in defence as Inter scored their first, second and fourth goals from corners.

While Raphael Martinho and Romulo both scored nice goals for Verona, the visitors headed home without any points as Inter leapfrogged Mandorlini's side into fourth in Serie A.

"We made some silly mistakes and paid a heavy price for them," Mandorlini told Sky Sport Italia.

"We conceded three goals on set plays and were too soft in those defensive situations.

"You can be unlucky if it's one but that many in one match means you aren't focused enough.

"Aside from how well we played otherwise, the fact remains we can only blame ourselves for conceding those goals."

Inter's coach Walter Mazzarri also finished the match unhappy after he claimed his team started to 'show off' after Rodrigo Palacio made it 2-0 in just the 12th minute, which allowed Martinho to pull a goal back after the half-hour mark.

But Mandorlini argued Verona, apart from their defending at set pieces, had 'played well throughout' the match.

The 53-year-old Italian claimed Verona, who were promoted from Serie B this year, deserved to be challenging for a UEFA Champions League place after nine games but needed to learn to focus against the bigger Serie A clubs.

"We can do better but above all must learn we can't keep making mistakes against the top clubs," Mandorlini said.

"We paid for those against Roma, Juventus and now Inter."