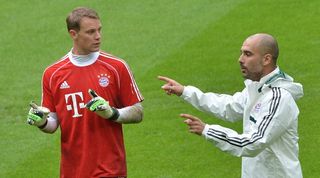 Guardiola enjoyed a successful three-year spell in charge of Bayern between 2013 and 2016, during which time he won three Bundesliga titles and two DFB-Pokals.

The Bavarians' dominance of German football was such that they won the league by margins of 19, 10 and 10 points in Guardiola's three campaigns at the helm.

The current Manchester City head coach continue to innovate with tactics and personnel at the Allianz Arena.

Guardiola moved Philipp Lahm from right-back to central midfield, and once experimented with Javi Martinez as a "false No.10".

He also employed a variety of different formations while in charge of the German giants, at times moving away from the 4-3-3 he favoured at Barcelona.

Guardiola even considered making what would have been his boldest move to date by using goalkeeper Neuer in the centre of the pitch.

The Germany international is famed for his ability in possession, which he took to new heights while working under the Catalan.

And according to Rummenigge, Guardiola was keen to test Neuer in an outfield role once the league title had been sewn up.

However, club officials overruled the manager and insisted that the former Schalke shot-stopper remain between the sticks.

“Manuel invented the art of being a footballer as a goalkeeper and revolutionised this position," Rummenigge told Bayern's official magazine.

“I still remember how Pep Guardiola, after winning a championship, seriously came up with the idea of ​​putting him in midfield for a game.”

Guardiola recently hinted that he may choose Ederson as Manchester City's first-choice penalty taker, with Ilkay Gundogan the latest outfielder to fail to convert from 12 yards.

It remains to be seen whether the former Bayern boss attempts to use the Brazilian custodian in a midfield role, though.