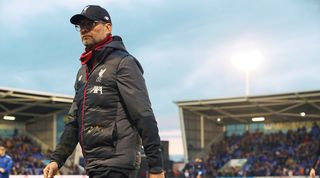 Tuesday’s FA Cup fourth-round replay against Shrewsbury Town will be the third time since he became manager that Jurgen Klopp has been absent for a Liverpool match.

The first was due to an operation back in February 2016, the other more recently when Club World Cup commitments created congestion last December.

This time, the reasons are more nuanced and debatable. Klopp has insisted upon “respecting” the Premier League’s newly-created winter break and therefore he and his first-team squad will be absent from Anfield on Tuesday.

Klopp has been probably the most vocal person in football regarding the failures of football authorities to consider the welfare of players when making decisions, and he recently gave an eight-minute answer on the topic in a press conference, calling upon governing bodies to sit down together to discuss the issue.

Therefore, the German manager sees this as an opportunity to hammer home his point. His decision has led to TV companies refusing to show the replay, given that it will effectively be Liverpool’s under-23s squad taking part.

But as much as Klopp is right about the changes needed in football, there’s a big opportunity being missed and you have to wonder if this is the best way to tackle the issue.

Firstly, as much as Klopp points to a letter from the Premier League urging clubs to respect the inaugural winter break and not organise any first-team games, Liverpool - like all clubs - also received a letter from the FA highlighting that any FA Cup replay would have to take part during this time. So this outcome has always been a possibility.

You could argue Klopp should be pointing his anger more towards some of the first-team players who collapsed against their League One opponents to create the replay. “It’s our fault today that we have a replay, 100 percent,” he said post-match. “But you cannot promise everybody time off and then, in the end, you take it away.

In that same interview he went on to acknowledge that the returning trio of Dejan Lovren, Joel Matip and Fabinho “needed the game, or maybe one more, to find the rhythm back.” Surely that “one more” game is the replay for Matip and Lovren?

It’s not just the centre-backs who need playing time after injury, Naby Keita hasn’t started a game since Boxing Day but is now back and available, James Milner has had a month out. Xherdan Shaqiri’s fitness isn’t as clear as his new hairline.

Replays are an important FA Cup tradition and should be preserved

Klopp could allow his regular first-team players their promised rest and holiday; Alisson, Alexander-Arnold, Gomez, Van Dijk, Robertson, Henderson, Wijnaldum, Oxlade-Chamberlain, Fabinho, Mane, Salah, Firmino, even Origi. The others could then be involved against Shrewsbury and still take a five-day break thereafter with no game for another 10 days.

That would give Liverpool an XI against Shrewsbury of: Adrian, Williams, Matip, Lovren, Milner, Chirivella, Lallana, Keita, Elliott, Minamino, Jones. A strong side that you’d expect to win the game, especially at home, and even give Chelsea a good run for their money in the fifth round.

It would be an opportunity for Minamino to get his first goal for the club, for Keita to get a much-needed start, for Lallana to get some playing time, and for Matip and Lovren to find their “rhythm.”

It would be another game, at least, for goalkeeper Adrian. Instead, the Spaniard will be sat on a beach somewhere knowing he’s unlikely to play another game this season.

They could still win the game, just like they have already shown with wins against Arsenal in the League Cup and Everton in the FA Cup this season, albeit with a side featuring more first-team players. But Shrewsbury will fancy their chances, especially with a money-spinning trip to Stamford Bridge available to them.

With the League title all-but wrapped up already, there’s a huge opportunity for Liverpool to win the treble for the first time in the club’s history - and the second English side ever after Man United in 1999. Only seven sides have achieved a treble in European football history.

Klopp has still never lost a two-leg tie in Europe at Liverpool so you have to make them strong favourites to progress in the Champions League, while the Premier League will be won earlier than any side has ever done before. The FA Cup, then, would be achievable, even with a rotated XI featuring squad players.

Klopp has often spoken of his squad writing their own history and while they are set to be written into Anfield’s history books regardless, achieving a treble in this manner would put them at the very top of the 128-year story.

Klopp, though, has insisted that even he won’t be present at Anfield on Tuesday night, with Neil Critchley taking full duties for the tie.

It’s a brave move by the manager and he should be applauded for taking a stand against football’s authorities that have refused to listen to those within the game and instead either kept with tradition or followed the money.

Klopp is reportedly being backed by the club’s owners for his stance and that’s completely understandable. He’ll argue that his decision is in the best interests of Liverpool and its players, but surely as Liverpool manager the best thing would be to compete for a truly historic treble?

QUIZ Can you name every Bundesliga champion since 1962?