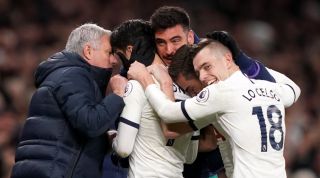 A start. That’s probably how to describe Tottenham’s 2-0 win over Manchester City. A first act within whatever Jose Mourinho’s reign proves to be and something to build on over the coming months.

Spurs’ performance had all sorts of holes. Their victory was entirely dependent on bounces of the ball, on Manchester City missing half-a-dozen excellent chances, and the kind of freakish efficiency in front of goal which, at best, a team can expect to benefit from just a few times a season.

In their two games against City this season, Tottenham have scored four times from six attempts and taken four points. In football terms, that's walking between the raindrops. Sergio Aguero missed two chances he would ordinarily have put away. Ilkay Gundogan, who had earlier seen his penalty pushed away, also hacked over from six yards out, with Hugo Lloris beaten and the goal unguarded.

But to describe this as a fluke would be wrong. Or overly simplified, at least.

Tottenham have a long way to go under Mourinho, that’s certainly true. Their defending still lacks order. Their midfield doesn’t offer enough protection. And the injury to Harry Kane has left the attack without a pivot, condemning it to subsist solely on counters.

Sunday, however, showed the value of a single, simplified agenda. This was a Tottenham team without the baggage. It was a side without a subtext and, in the decisive moments, that showed in their engagement.

Focus is one of those indeterminable factors in football, as is commitment. However small those margins are calculated to be, though, they’ve been the root diagnosis of so many Spurs performances. They've manifested in bad goals conceded and chances not taken. In yards not run and tackles not made. Individually, unremarkable moments. But together, they describe a weakness which is nearly always exposed somehow over the course 90 minutes.

This was the first game following Christian Eriksen's sale. And Danny Rose has also been exiled, sent as far away as geographically possible. The results may be illusory at this point, but in Tottenham’s concentration, their work rate and their sheer effort to resist to Manchester City on Sunday, they showed themselves to be a healthier side. One which has clearer eyes, at least, and a more obvious purpose.

Maybe it was the willingness to track runners and close angles. Or the desperation with which they protected their goal. Or even how attentive they were to Mourinho’s instructions, as he and Joao Sacramento lectured from their technical area. Possibly it was in their furious reactions to Sergio Aguero and Raheem Sterling. Or the way they celebrated at full-time.

True, Manchester City should have made sure that none of that mattered. Consider it from this angle, though: how many of their chances were made slightly harder by little bursts of effort?

Equate it to a tennis rally, in which one player makes the other play one more shot. He'll probably still lose the point, but by giving his opponent one more question to answer, there's still a chance of a mis-hit.

Most obviously, that relates to the Gundogan miss, when Toby Alderweireld cleared Aguero's shot off the line, before then taking up a position which made the German's finish slightly harder. One more shot. One more which, in their self-indulgent, imprecise mood, City were unable to come up with time after time.

Do these little things happen if a team's basic chemistry isn't right? Do players behave in the same way if they know that there are transients among them who will eventually let them down? Most likely not. Or at least not with enough reliability, which is probably why coaches place such emphasis on unity. It's why it was such a recurring theme with Mauricio Pochettino.

So Tottenham looked right on Sunday. Only two or three players may have been responsible for the malaise, but those individual issues seemed to inform a collective uncertainty – a sense, perhaps, that while those players remained at the club nothing was ever likely to get better.

Emotionally, but also practically. With Eriksen chopping those lazy passes around, carrying himself like he was doing the club a favour, the midfield was tuned to his flippant rhythm. Rose, with his calamitous defending, has been a further threat to a backline which was already fragile. And when he wasn’t playing, he managed to find other ways to siphon away the joy.

On Sunday, both of their replacements were outstanding. Lo Celso has mesmerising ability and provided exactly the sort of life that Eriksen was prone to stealing away. At left-back, Japhet Tanganga is one of the season’s great stories. He seems like a charming person and, eventually, he'll be a very fine centre-half. Critically though, he’s someone whose only ambition is just to keep being picked for this team.

Together, what a difference they make to the mood. Yes, that includes the way the crowd responds. That’s important and New White Hart Lane lived through Sunday’s game in a way that it hasn’t for many others. It was intense and loud and fiercely partisan, and presumably a huge advantage.

But this change is in the way that the team is bound together, too, and in its stitching. How they work for each other. How they concentrate.

In how honest it suddenly seems in comparison to what it was.

QUIZ Can you name the 100 most valuable players in the Premier League?