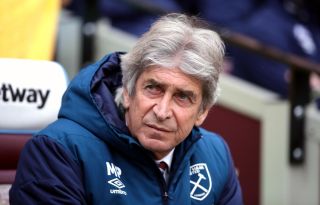 Manuel Pellegrini wants a Premier League top-10 finish for West Ham this season and a challenge for Europe next term.

The Hammers slipped out of the race for seventh, and a potential Europa League spot, despite beating Tottenham last weekend.

It is the first full season Pellegrini has managed on the continent that he has failed to qualify for European competition, having achieved it with Villarreal and Malaga as well as Real Madrid and Manchester City.

Nevertheless, Pellegrini insists finishing in the top half will illustrate how much the Hammers have improved following last season’s relegation battle.

West Ham currently lie 11th ahead of Saturday’s visit of Southampton, four points behind Watford who they face on the last day of the season.

“It’s very important,” he said. “It will be better for the club because if you compare it with last season, you have improved.

“I have enjoyed my first season here very much. I came to a big club and the Premier League is the best in the world so to return here, I am happy.

“But I also want to do better. This is my first time in Europe that I have not qualified for European competitions so I hope next season we will do it.

“Realistically, when you have 60,00 people behind you, this is a big club. Maybe you cannot compete with other clubs with money, but there are other ways to reduce the distance.

“We must try to fight and be as high up the table as we can.”

West Ham have received a triple midfield injury boost ahead of their final home game of the season.

Samir Nasri and Manuel Lanzini, who missed the win at Tottenham, have been passed fit to face Saints.

And there could also be a return to the bench for Colombia international Carlos Sanchez, who has been sidelined since September with a long-term knee injury.

“Maybe for the first time since the first game this season, we have options,” added Pellegrini.

Andriy Yarmolenko and Andy Carroll are the only injury absentees.