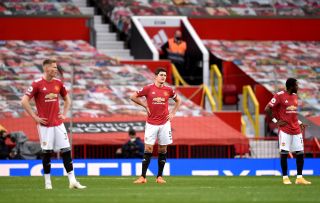 Patrice Evra branded Manchester United a “shambles” after watching their 6-1 home defeat to Tottenham as they capitulated at Old Trafford.

United led after being awarded a penalty inside 30 seconds, converted by Bruno Fernandes, but Spurs quickly hit back through Tanguy Ndombele and Son Heung-Min before the floodgates opened following a red card for Anthony Martial.

Son scored again, while Harry Kane got two and Serge Aurier was also on the scoresheet.

Speaking on Sky Sports, Evra said he might have to quit his job as a pundit if it involved analysing any more such performances.

"I really would like to end my contract with Sky – I know you have to have some filter when you talk on TV." 😳— Sky Sports Premier League (@SkySportsPL) October 4, 2020

“Alexis Sanchez said after his first training session he asked his agent to end his contract,” he said. “That’s what I’m going to ask Sky because this is my second game working…I’m a positive person and I never want to talk about United because telling the truth can hurt.

“I’m passionate, I love my club. I know I have to have some filter when I talk on TV, but that was a shambles.

“They let down all United fans. I don’t care about the result, I’ve been beaten 6-1, but every year I feel the same, that’s why I prefer to work on a different game if I stay at Sky.”

The result will raise questions over the progress made under Ole Gunnar Solskjaer, but Evra said the blame should go higher up.

“We will talk about the manager but what about the board?” he said. “How many years now since (Sir Alex Ferguson) left, how many managers have been sacked now? We talk about Ole, maybe he’s the man, maybe not, but we don’t know about the transfers.

“It’s difficult to break a man like me, I’m a positive person. I don’t promote violence but many people need a good slap right now, that’s what I would do if I’m working for the club.

“It’s about the body language, the love for that shirt, the passion, I don’t see any players understanding wearing that shirt. You’re carrying on the story of the club.”

Deals for Edinson Cavani and Alex Telles could be completed before Monday night’s transfer deadline, but Gary Neville said a lack of action in the market to date was having an impact on the mindset of the existing squad.

“There’s no excuse for the 11 players on the pitch, or the 13, 14 players involved in the game because that was absolutely pathetic,” Neville said. “The body language was terrible, spineless.

“Off the pitch, the stuff with Harry Maguire, Mason Greenwood, the darkness around recruitment…You see Liverpool, Manchester City, Chelsea all signing players. The minute Spurs go 2-1 up all those negative thoughts drain every bit of confidence.

“It’s not right, but it’s what happened.

“City have spent £150million, Liverpool have signed (Diogo) Jota and Thiago (Alcantara). They’ve pulled away psychologically before the season even started.

“The psychological damage of not bringing in players is hampering the current players. The club’s job is to build title-winning teams. Manchester United have to win the title. We can’t drop those standards.”