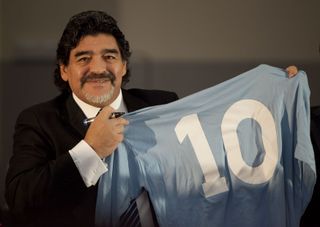 The 52-year-old is a revered figure in Naples after a highly successful stint at the Stadio San Paolo as a player.

Maradona enjoyed a seven-year spell at the club, and helped them to the only two Serie A titles in their history in 1987 and 1990.

The mercurial talent also fired Napoli to success in the UEFA Cup, Coppa Italia and Supercoppa Italiana in an outstanding stint at the club.

And the former Argentina manager has now set his sights on a return to the club in a managerial position when Spaniard Benitez departs the Serie A outfit, but concedes big sides are unlikely to take the gamble and hand him the reins.

"When Benitez leaves I would like to coach Napoli," Maradona said at a question and answer session in Milan.

"There are coaching changes all over the place, from Spain to Italy to England to Russia, but some people are afraid of me.

"That's why I'm not coaching."

Napoli have had a terrific start to the campaign under Benitez, with the club winning six and drawing one of their seven fixtures in Serie A so far this season.

The 53-year-old will take his side to the Stadio Olimpico on Friday for a top-of-the-table clash with Rudi Garcia's Roma.