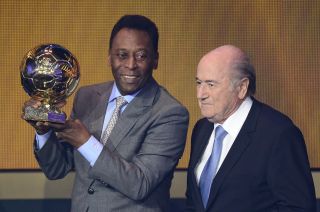 The legendary duo are widely accepted as the two greatest footballers to have played the game and have regularly bickered in public over their respective standing.

And having seen Pele lift an honorary award at the recent FIFA Ballon d'Or ceremony, Maradona has reacted furiously to being overlooked, stating it was a "mistake" to reward the Santos legend.

He blasted: "How can you say that Pele received the Ballon d'Or before me?

"I received the award in Paris (Golden Ball for services to football from France Football in 1996).

"So to make Pele the first one to receive the award before me is a huge mistake.

"According to me, Pele will always remain second best in football when compared to Maradona.

"Look at it this way, in his own country, Brazil, Pele is the second best sportsman after (former Formula One racer) Ayrton Senna.

"Pele will always be second, be it in international football or in Brazilian sports. The sad thing is that he is second best and he will continue to stay in that position.

"While presenting the award (this year's Ballon d'Or) to Cristiano Ronaldo, Pele uttered his name as 'Cristiano Leonardo'. This just shows where he belongs."

Neither Maradona or Pele were eligible to win the Ballon d'Or in its original existence as non-Europeans were ineligible.

Maradona captained Argentina to success at the 1986 FIFA World Cup, also securing league championships in Spain with Barcelona, Italy with Napoli, and his homeland with Boca Juniors.

Pele has three World Cups to his name - more than any player in history and officially scored 1,283 goals in 1,363 games.