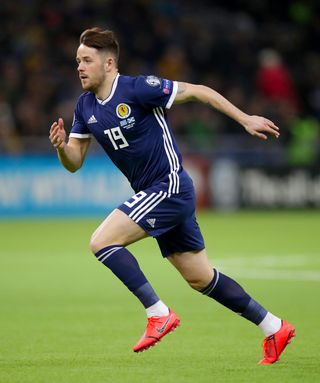 Marc McNulty admits leaving a “massive club” and missing out on a potential promotion party with Sunderland was hard but he never had to think too long about rejoining Hibernian.

The striker cut short his season-long loan on Wearside to sign for Hibs on loan for the second January running.

McNulty, who is less than halfway through a four-year contract with Reading, was signed for Sunderland by current Hibs head coach Jack Ross.

The 27-year-old hit four goals in his first nine matches but Ross was sacked and McNulty only started four games under his successor, Phil Parkinson.

Ross was keen to sign him again and McNulty was in little doubt about returning to Leith to try to add to the eight goals he netted for Hibs last season.

“The new manager had come in and I wasn’t really playing under him,” the former Livingston player said.

“It’s hard sometimes in football –  Sunderland are a massive club with a good chance of getting promotion. Could I have stayed there and come on now and again and been part of a team that got promoted? I thought about that but I just want to play.

“It happened to me at Sheffield United when I was there. They got promoted and I was there at the end of the season, you have not really played that many games and everyone is celebrating.

“It was great to be a part of it and a good experience but there is something inside you that you want to play and be involved.

“Coming here last year, I loved it, and when the opportunity came up it was a no-brainer.

“The manager here, I played for him before, he has confidence in me and hopefully I can repay him. That was another big factor, he took me there and I love working with him and big Pottsy (John Potter).”

McNulty went through a whole range of emotions before signing late on transfer deadline day on Friday.

“It was a bit of a nightmare,” he said ahead of Wednesday’s Ladbrokes Premiership match against Rangers at Ibrox.

“It was difficult because the Sunderland manager was wanting to keep me and it’s hard leaving a club like that. He was brilliant to be fair – except for not playing me!

“I chatted to him and his assistant regularly, he was probably sick of me. I have got to thank him as well because it was down to him to cut my loan short and I appreciate that.

“I was a bit worried but Hibs were great and really pushed it through. (Sporting director) Graeme Mathie and (chief executive) Leeann Dempster were brilliant, they were on the phone saying they were trying everything they can to bring me here, and I have to thank them because they did.”