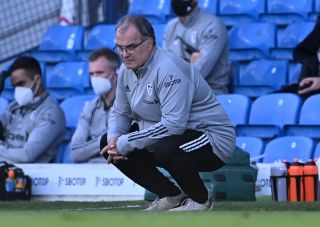 Marcelo Bielsa admitted he is concerned about the number of goals Leeds have conceded in their first two games back in the Premier League.

Leeds held on to beat Fulham 4-3 in their first top-flight fixture at Elland Road in 16 years, one week after losing by the same score in their opening game at champions Liverpool.

“We are worried,” said Bielsa. “It’s not like things we don’t expect to happen. The goals we have received, there is nothing surprising in conceding these type of goals.

“As the competition goes on I think we will be able to improve our defence.

“We will identify why these errors happened and work on stopping these difficulties happening again.”

Patrick Bamford and Costa’s second goal put Leeds 4-1 up with over half an hour remaining, but Fulham hit back through substitute Bobby Decordova-Reid and Mitrovic’s towering header to leave Leeds hanging on.

Bielsa’s side have scored seven and conceded seven in two Premier League matches, but the Argentinian said he will not be changing tactics.

“What the matches have showed was that we have to continue doing what made us successful in the first place,” he said.

“That’s the best way to get a result, rather than putting men behind the ball. It would be an error to stop doing those things that make you successful.”

Bielsa confirmed goalkeeper Kiko Casilla had not been included in the squad due to an injury sustained in the midweek Carabao Cup defeat to Hull.

Leeds’ record signing Rodrigo, handed his Premier League debut for the club after Pablo Hernandez sustained a groin strain in the warm-up, was withdrawn at half-time due to fatigue, Bielsa said.

Fulham boss Scott Parker was left to rue his side’s defences lapses, but said his players had showed “massive character” after fighting back.

“You can’t expect to have to score four or five goals to get something out of a game, which is what we’ve had to do today,” he said.

“There were positives, of course. We had good moments in possession and caused Leeds a lot of problems.

“But on the flip side we gave away easy goals and gave ourselves a mountain to climb.

“We need to improve for sure, but there were positives. It was an entertaining game and we were partly responsible for that.

“My team showed massive character. At 4-1 the floodgates could have opened, but I saw a team that kept believing and got themselves back in the game.”

Parker said the club were still hoping to bring in defensive reinforcements before the end of the transfer window.

“There’s been no progress in the last week or so, but I realise we have to strengthen in certain areas,” he added.

“We’re still trying to bring people in. We all recognise that’s what we need to do to help us improve.”