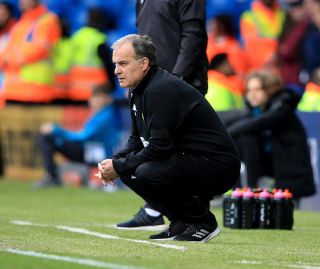 Marcelo Bielsa insisted he never said he would walk away from Leeds if they did not win promotion to the Premier League this season.

Speculation over the 63-year-old Argentinian’s future has been mounting since Leeds’ bid for a top-two finish floundered during the Sky Bet Championship run-in.

Bielsa said last week that the decision whether he remained at Elland Road beyond the play-offs was not up to him and he refused to comment further.

But he offered Leeds fans hope he will remain at the club even if they failed to end their 15-year exile from the top flight.

“I never said that if we don’t get promoted I won’t carry on my work here,” Bielsa said before his side play at Ipswich in their final game of the regular season on Sunday.

“I just said that it was not the moment to talk about the subject. I just said it’s about receiving a proposal and then accepting the proposal or not.

“I would never say that if we stay in the Championship I won’t stay here, otherwise you would say that the importance of this club is linked to the division they play in.

“For me this team and this club are important playing in the Premier League, the Championship or League One.”

Bielsa signed a two-year contract with the option of a third year when he was appointed as Paul Heckingbottom’s successor in June last year.

“I don’t want people to think that I’m not thankful because if after the year I spent here I limited my valuation of Leeds United to the fact that they play in one division or another, it would mean I’m not thankful,” he added.

Leeds will secure a third-placed finish behind promoted pair Norwich and Sheffield United if they take at least a point from their final game at Portman Road on Sunday, or if West Brom fail to win at play-off chasing Derby.