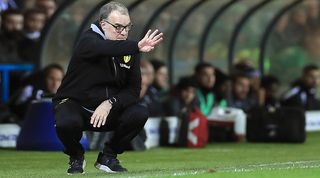 Leeds boss Marcelo Bielsa insisted there is no prospect of his team running out of steam in the promotion race after they were beaten 1-0 at QPR.

The Whites, who would have gone top of the Sky Bet Championship had they won, stayed third after losing to a Rangers side that had lost their previous seven league games.

Having dominated most of the first half, the visitors were undone three minutes into the second.

Luke Freeman, who was outstanding throughout, deftly flicked the ball home after being set-up by Massimo Luongo.

However, when asked if he feared Leeds might fade during the crucial final stage of the season, Bielsa said: “Your question does not have any basis because if you watch the game you can see that this team has much energy.

“What our team has shown in every game is that we have an excess of energy.

“It’s clear that you don’t know what you are talking about, because if there is something this team doesn’t lack it is energy.

“If you look at the figures you can see that if there is a problem that this team has, it is not a lack of energy.

“It’s not an opinion, you just have to look at the figures to draw your own conclusions.”

But Bielsa admitted he was frustrated that his team failed to make the most of their first-half dominance.

“We didn’t take advantage of the first half. In that first half we dominated the game,” he said.

“They had a good five minutes at the start of the second half. From that moment the game changed.

“They could then counter-attack and create danger and for us it took a while to build back into the game and create chances.”

“He showed his real quality and infectious enthusiasm that he gives to the team,” said McClaren.

“When you’re looking for leadership and looking for people to have courage and take the ball, he’s got all that.

“He was our talisman tonight. There were a lot of heroic performances but his was incredible.

“We fought for each other tonight and that was the key thing. I was very proud of them.

“We’ve been going through results that have been undeserved. We said to stay calm, not panic and that it will turn and we’d get the luck.

“But you work hard for that and we worked hard. I thought it would take an almighty effort to win this game, but they were tremendous.”