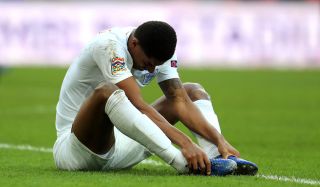 Marcus Rashford is the sixth player to have withdrawn from Gareth Southgate’s England squad this week.

Here, Press Association Sport takes a look at the six unavailable players for the Three Lions’ Euro 2020 qualification opener against the Czech Republic.

Despite being on the bench against Schalke in the Champions League last midweek, manager Pep Guardiola made it clear that the centre-back is troubled by a groin injury and as a result omitted him from his FA Cup squad.

Delph was replaced less than an hour into Manchester City’s FA Cup quarter-final win at Swansea last weekend and withdrew from the squad with an unspecified issue.

The midfielder came on as a second-half substitute as Chelsea lost to Everton on Sunday but withdrew the following day through an undisclosed issue.

Played the full 90 minutes as Manchester United bowed out of the FA Cup at Wolves, but a reoccurring complaint saw the left-back pull out on Monday.

Came to St George’s Park out of respect to Southgate and in a bid to overcome a back injury picked up when Liverpool played 10 days earlier. Made progress but returned to his club on Wednesday.

Played the entirety of United’s FA Cup loss at Molineux, scoring at the end, but has been unable to shake an ankle injury during individual sessions. Returned to United on Thursday.