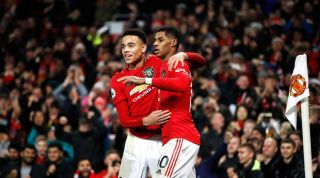 Mason Greenwood says he takes "inspiration" from what Manchester United team-mate Marcus Rashford has achieved so far in his career.

Rashford made his senior debut for the club in 2016 and is among the Premier League's top scorers this term, having found the back of the net on 14 occasions.

Greenwood, a fellow academy graduate at United, has made his own first-team breakthrough this season.

The 18-year-old has scored 10 goals in all competitions and made 20 appearances in the Premier League.

And Greenwood says he has looked up to Rashford ever since he made his maiden appearance for the senior side.

"Yeah, definitely," he told SPORTBible when asked if he saw Rashford as a role model.

"He’s been in the academy and come through the ranks and I feel like I’m following in his footsteps.

He’s a few years older than me but I can definitely take a lot of inspiration from what he has achieved so far.

"I’ve known him for a long time so I've seen how well he has done and how he has progressed as a player, so there’s lots to learn from being around him."

Greenwood got his first taste of life in the senior ranks during United's pre-season tour in summer 2018.

And the teenager believes he benefited hugely from being surrounded by experienced first-teamers.

"It was a different level really," he added. "The crowds there were all a lot bigger than what I was used to playing in front of, and there were a lot of fans from all around the world, so it was a good experience.

"To go away with strikers such as Anthony Martial, Marcus Rashford, Alexis Sanchez and Romelu Lukaku was the best way to learn, just seeing how they worked as top strikers and top finishers was great for me.

"They all looked after me and helped me on and off the pitch."

United will move to within three points of the top four if they beat Chelsea next Monday.