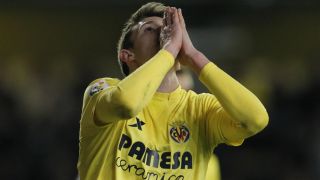 Villarreal full-back Adrian Marin says he has heard nothing to suggest he is a concrete transfer target for Liga champions Barcelona.

A report in Spain last week claimed Barca transfer chief Robert Fernandez had watched the 19-year-old in action against Athletic Bilbao with a view to launching a bid to sign him as future competition for Jordi Alba.

Marin, however, has dismissed the rumour and says he will not become distracted by any talk of a possible move.

"The truth is that I don't know anything," he said, as quoted by Marca. "I got up and saw they were talking about me on the news but I think it's nothing more than a rumour and I don't pay it any attention.

"I'm just focused on working every day with my team-mates to keep improving and gain experience, together with my team and the technical staff.

"As it's a rumour, I don't give it any importance."

Marin has made nine appearances for Marcelino's side so far this season.