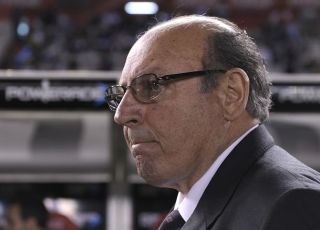 The Uruguayan - who took charge three years ago - has opted to ended his tenure following Peru's failure to qualify for the FIFA 2014 World Cup. A return of four wins from 16 games meant Peru finished seventh in their nine-team group.

And now the 68-year-old believes the time is right him to step aside at the end of his contract, having previously revealed his intention to leave when Peru's World Cup hopes were ended.

"We recognise that things didn't work out, we are responsible for that and we are more disappointed than anyone else," he told the Canal N cable news channel.

"I said all along that if we didn't qualify, we couldn't continue and that's what happened.

"They offered us the chance to carry on and we said we would keep our word, we couldn't continue having not qualified."