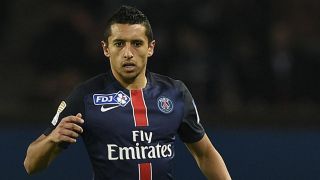 Paris Saint-Germain defender Marquinhos says he may be forced to consider his future at the Parc des Princes if he fails to cement a first-team place.

The Brazil international joined the Ligue 1 champions in July 2013 from Roma, but has failed to become a regular starter, with compatriots David Luiz and Thiago Silva PSG's favoured centre-back pairing.

Marquinhos has made just 12 league appearances this term, with only seven of those starts, and Premier League duo Chelsea and Manchester United are reportedly monitoring his situation.

The 21-year-old insists he wants to stay and fight for a place in the PSG team, but may consider his position at the end of the season.

"Like everyone else, I always want to be a part of the starting line-up," he told JDD. "But we all must respect the choices of the coach and management.

"I will continue to work to get my place. But it's true there comes a moment where I am older, you cannot always get used to the bench.

"There are six months to win titles. After, we'll see what happens."