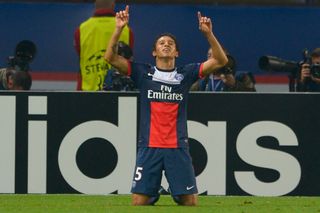 The 19-year-old has two Champions League goals and one Ligue 1 strike to his name in his past six competitive outings, after earning a spot in Laurent Blanc's side due to an injury to Thiago Silva.

The former Brazil Under-17 representative said he has defied his own assessment of his ability, scoring against Olympiakos Piraeus, Toulouse and Benfica.

"I didn't know I could do that. In youth teams, I scored some goals but since I turned pro, be it at Corinthians or Roma, I had never scored," the teenager told Ligue 1.com.

"It's magical what's happening with PSG.

"Right from my first game, despite not having played for four months, I scored my first goal.

"It's a moment I'm going to remember forever. And then, almost straight after, I scored two more important goals."

Marquinhos, formerly of Italian club Roma and Brazilian outfit Corinthians, said Blanc - an ex-defender himself - encourages his stoppers to get forward and impact the scoreboard.

"It's so new for me I didn't know how to celebrate... I was a bit lost," Marquinhos said.

"More than the joy it brings, it also gives me confidence. I needed that.

"He (Blanc) encourages the defenders to go into the opposition box for set-pieces.

"It's something he really wants to develop and which should become our trademark.

"He shows us how we should position ourselves, which runs to make."