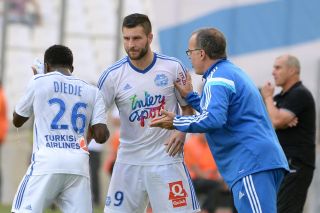 Marcelo Bielsa's men strung together their eighth consecutive victory in the French top flight on Sunday -  N'Koulou's header from a set piece in the 20th minute followed 15 minutes later by Gignac's left-foot strike from inside the area.

Despite the clean-sheet win and equalling the club's record winning streak, the pair felt Marseille were suffering from tired legs as they preserved their run.

The Stade Velodrome club last won eight on the trot in 1998, which matched their efforts from the 1937 season.

"We passed this test brilliantly. Our victory is well deserved. I think we have stopped Toulouse well. We suffocated them," Gignac said, after scoring against his old side.

"We played brilliantly for 30 minutes and showed great character. After that we dropped off the pace a bit, largely because of fatigue."

"We suffered physically in the second half," he added.

"But we have managed to remain very strong with the three players in defence plus Brice Dja Djedje and Benjamin Mendy, who also rallied with Gianelli Imbula.

"These six players were impressive. The coach used to say that if we defended well, we will attack well. That's what we showed tonight."

Gignac tops the golden boot standings in Ligue 1 with 10 goals but the France international said he still needed to work on his game.

"I do not know if we can say that I am on fire, I was not in shape," Gignac said.

"I was happy with some of my efforts but I'm not too happy with my game technically."

Defender N'Koulou said they battled late on in front of their home faithful but were able to hold on for their fifth clean sheet of the streak.

"We felt tired late in the game. The orders were to keep going and force the issue," N'Koulou said.

"That's what we did. Fortunately for us, we were strong, we held on. Hats off to the whole team."