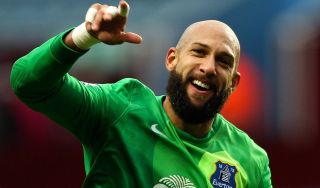 Martinez's side looked set to make an awful start at Villa Park when Seamus Coleman tripped Christian Benteke inside the area, only for Howard to tip the Belgian's eighth-minute spot-kick over the crossbar.

Both sides had their fair share of chances, but Howard continued to deny Villa as he made multiple saves, denying Benteke, Andreas Weimann and Leandro Bacuna.

Romelu Lukaku and Leon Osman secured Everton's win with goals in the final 22 minutes, but Martinez had no doubt that Howard's display was key.

The Spaniard said: "No one deserved that clean sheet more than Tim. We are very privileged to have a player like him.

"Everyone was focusing on trying to score and we didn't control Villa's threat. Without Tim today it would have been a very difficult second half."

Martinez also highlighted the importance of having strength in depth, expressing his delight at a "masterclass" from Leon Osman following the midfielder's 60th-minute introduction

He added: "I'm really pleased. I said before that we have a really strong squad. All that matters is every player is ready to help whenever they are called upon.

"I told Leon that it was going to be a good opportunity for him in the last 20 minutes with Villa tiring and when he came on it was a masterclass of getting on the ball in the attacking third."