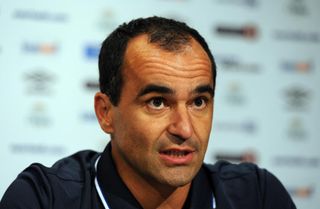 Everton were on track to reach the qualifying rounds of the UEFA Champions League last season, only to falter and finish seven points behind Arsenal in the Premier League.

The Merseyside outfit pushed Arsenal, whom they host on Saturday, all the way in 2013-14, earning a win and a draw on the road.

But if Everton want to be regarded as a genuine threat to England's top four, it will take more than one season, with manager Martinez referencing Arsenal's consistency on the big stage.

"It doesn't surprise me because they are a team that got into the Champions League positions and have been doing it for many years. We've got to earn that respect," Martinez told the Liverpool Echo.

"I don't think just one season when we did well in two games against them can give you an outcome in that respect."

Everton opened their Premier League campaign with a 2-2 draw at newly promoted Leicester City and Martinez is adamant the disappointment of that result will spur his team into action against Arsenal.

"What we have in our favour is that we are still hurt after dropping two points at the weekend," the Spaniard said.

"I like that. It shows our standards and that we don’t accept second best."

Martinez added: "What we want is to look at the game against Arsenal as an opportunity to be as good as we can be.

"Arsenal have signed well in the summer. They've brought in players who fit into their style of playing very well and I don't think it's a big surprise to have them considered as one of the biggest forces not just in English football but on a European front.

"Saturday is a big challenge but we're ready to face it head on."