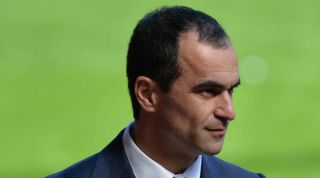 Own goals from Antolin Alcaraz and Seamus Coleman consigned Martinez's men to defeat at St Mary's Stadium, with Everton failing to overtake Arsenal and move into fourth as a result.

The Merseysiders are a point behind Arsenal with just two games left to play, while Arsenal host Newcastle United on Monday and can extend that gap.

But Martinez remains bullish over their hopes of securing a spot at Europe's top table.

He told BT Sport: "From our point of view, it doesn't change at all.

"We have had eight wins in 10 games - it's a phenomenal return.

"We go into the next two games and hope to get maximum points, all we're looking for is to get the maximum points and we'll see where that leaves us.

"Today was a real setback but we'll learn from this, we're a very young group."

Alcaraz was paired at the back with John Stones - just the second time that the duo had played in central defence together.

And Martinez conceded that unfamiliarity may have hampered his side.

He added: "I think we got a bit frustrated. We were not our normal selves.

"(In) the back five, you need that consistency and with the changes it took us 20-25 minutes to get into the game.

"After that, we came a bit stronger in the second half, but not having that confident look we usually do.

"Today, everything that could have gone wrong defensively did and that made things difficult."