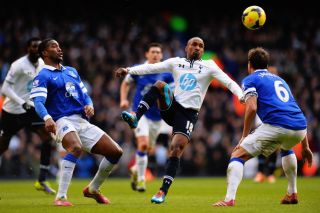 Jagielka has been out of action since February's defeat to Chelsea with a hamstring complaint while Frenchman Distin limped out of the win over Manchester United earlier this month with a similar injury.

As a result, Everton were forced to field a makeshift central defensive pairing of Antolin Alcaraz and John Stones in Saturday's 2-0 defeat to Southampton.

It leaves Martinez's men four points adrift of Arsenal in the race for the final UEFA Champions League spot but the Spaniard is optimistic that both could play a part this weekend.

"Phil has done really well in his programme and has developed strength in his muscles," he told the club's official website. "He looks completely regenerated and is desperate to be available.

"It will be a late call whether he is available or not but I would be surprised if he doesn't make the squad for Saturday.

"Sylvain Distin again is pushing himself to be available. We need to carry on with the programme that he has and make sure that the treatment is bringing a good effect.

"I would say he is 50-50 for the weekend but now we have hope that we will see Sylvain before the season ends which is a fantastic bonus."