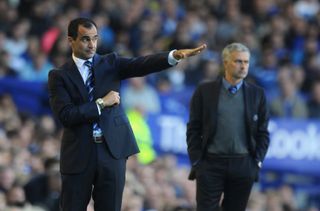 Steven Naismith scored on the stroke of half-time to give the Spaniard’s side their first Premier League victory of the campaign following three consecutive draws.

This means Everton are now one of only two clubs with an unbeaten record in the top flight this season - local rivals Liverpool being the other - but manager Martinez has insisted his team still have hunger to improve.

"To be able to beat a team like Chelsea, to keep a clean sheet the way we did it, it gives you great, great satisfaction," the former Wigan boss said.

"But that group of players there is not just happy with that, they want to work hard and be better at what we want to do."

Martinez went on to say he is delighted with the depth of his squad after they inflicted Chelsea's first league loss of the season without several first-team players.

"You're looking around at the players that were missing today - Romelu Lukaku, Arouna Kone, Steven Pienaar, the list goes on," he added.

"You're starting to get that really strong dressing room that's not just 11 or 12 players that can play. It's real good competition for places and for me that's very important going forward."