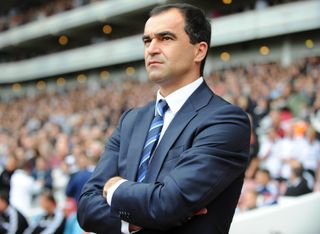 The Merseyside club have made a solid start to the new Premier League season in Martinez's first campaign in charge at Goodison Park.

They sit sixth in the table after Saturday's 2-0 triumph away at Aston Villa made it five wins from their opening nine league games.

The next few weeks will represent a real test of their ability to keep pace with their fellow top-four contenders, with Sunday's home clash with Tottenham starting a run of five games that will also seem them take on arch-rivals Liverpool at home and Manchester United away.

But Martinez feels that they are far from the finished article as his squad continues to gel.

"We have got a really good start behind us," he told Sky Sports News.

"We have a special group of players with terrific support and every game is a unique opportunity to enjoy our football and take as many points as we can. But we are still developing and growing.

"It is early days but everyone has played a massive role in a good start and we want that to continue."