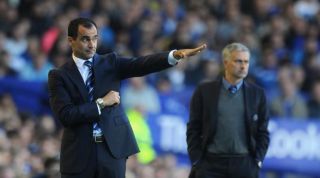 The Merseyside club edged an exhilarating contest thanks to Steven Naismith's close-range header on the stroke of half-time.

The home side survived a barrage of efforts from Chelsea, with Jose Mourinho's charges wasting several good opportunities throughout the game.

But Everton defended resolutely, and almost grabbed a second when Leighton Baines hit the crossbar with a free-kick in the dying stages.

And, while Martinez believes Everton must still improve, he was delighted with the way his players battled for victory, his first in the Premier League since taking charge.

"It wasn't the perfect performance from our point of view, but we showed great character and all the attributes the team has to show to be a winning side," he said.

"Forget about the technical and tactical side of the game. I think the crowd understood that we are trying to play in a different style, a different manner and at times it can be a bit difficult when you play a team like Chelsea.

"We gave away two or three chances probably from us giving the ball away or not playing to our concepts sharp enough.

"But the way we reacted, the way we took responsibility and defended was immense.

"Then throughout the game I thought we carried a good threat. I always thought we were unlucky not to get a second goal."

He added: "I've been a big admirer of Gareth Barry for a number of years.

"I think Gareth is very unique, that profile of midfielder doesn't exist much in English football.

"He senses danger like no one else, he has great composure, makes good decisions and establishes good relationships all over the park.

"He hasn't played any official minutes this season and he shows that fitness level, it shows he's a pristine professional, works extremely well and he's going to be a great influence on James McCarthy and Ross Barkley. He's going to be perfect guidance for the future."