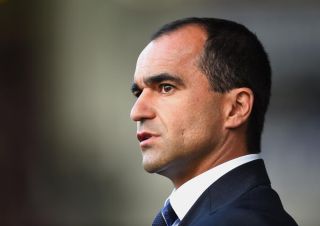 The home team thrilled Goodison Park with a largely dominant display that gave them a deserved 2-0 half-time lead through goals from Seamus Coleman and Steven Naismith.

Everton appeared on course to repeat their storming 3-0 win over Arsene Wenger's men in April, but goals inside the final 10 minutes from Aaron Ramsey and Olivier Giroud ensured a share of the spoils.

"For 70, 75 minutes it was the perfect performance - very similar to the one we had not that long ago when we faced Arsenal," Martinez said.

"The first half display was full of dynamic football, full of energy. We were really, really strong every time we went forward.

"We defended really well. We stopped Arsenal from having a shot on target [during the first half].

"Scoring the two goals should have been enough to control the game in the normal manner that we do.

"I just felt that certain individuals and as a team… we dropped our energy levels.

"When you do that you have to score that third goal. Otherwise, if you allow Arsenal to get a goal back, all of a sudden they have a bit of momentum.

"The disappointment is the result, there's no two ways about it. But the performance is phenomenal.

"It was exactly what we wanted but it gives a clear direction of where we have to work because it was a performance of an early moment of the season where we couldn't maintain it for 90 minutes.

"But for the long spells of the game it was a performance that deserved the three point and we felt really, really dominant against a really strong side in front of us."

The result was Everton's second 2-2 draw in as many outings this season having twice surrendered the lead on the opening day at Leicester City, but Martinez maintains there are plenty of reasons for his players to remain upbeat.

"The two games we have played now, Leicester and Arsenal, we are the ones responsible for us not getting three points," he added.

"But it gives you a real excitement looking forward because if we can correct and improve our levels it gives us fantastic potential.

"I always like to analyse the performances further than the scoreline."