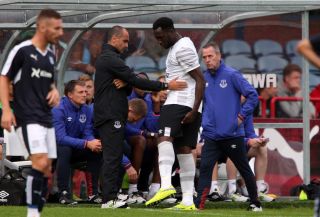 And the Spaniard claims the striker arrived in the international camp a happier player because of his move from Manchester United to Inter Milan.

Lukaku is set to be unleashed on Scotland in a Euro 2020 qualifier on Monday night after being rested for his country’s 4-0 victory in San Marino.

The 26-year-old was subjected to taunts from a significant number of Cagliari fans a week ago and called for unity from players to tackle the problem.

Martinez, who managed the forward at Everton, said: “Romelu is one of those modern footballers, he was born with attention. He had the media following him around in Belgium since he was 16.

“He had the expectations of a team that had to win at Anderlecht with Champions League participation. Then he had a big transfer to Chelsea, had his time at West Brom, then handled big transfers to Everton, Manchester United and now Inter.

“Romelu doesn’t get affected. He is one of the most driven boys you can see. His life is football,  he lives to score goals. So I haven’t seen a difference.

“It is true he was sad with the episode he had to go through but I’m sure that is something everyone in football will try to help him and hopefully people running football will eradicate it.”

Lukaku netted the winner at Cagliari and Martinez feels he is thriving again after a largely unhappy spell at Old Trafford.

“In the June camp I saw Romelu was free on the pitch and performed very well but he was quite concerned off it,” the former Everton boss said.

“This is the first time I have seen him happy going back many, many camps. He is so focused and refreshed by his new challenge.”

Scotland fell six points off second place after a 2-1 home defeat by Russia on Friday but Martinez believes Steve Clarke’s men are a team on the up.

“You have six players at least starting week in, week out in the Premier League, three of those are in the top six,” he said.

“This has the makings of a young generation with huge potential.

“Now the work is to get that competitive edge. Steve Clarke needs to have time, patience and opportunity to work at international level the way he works at club level.

“The talent in the Scotland team is there to qualify for a major tournament, no doubt about that.

“Scotland are probably one or two good results away from being a team that can qualify.”

Scotland skipper Andy Robertson admits only a win will do against Belgium and Martinez is wary.

“We know Scotland are almost going to be like a wounded animal,” the former Motherwell midfielder said.

“The first 15 minutes against Russia were the best I have seen Scotland play for many years. The intensity, the intent, quality from out wide, a really good formation, getting players in good positions.

“And then there’s the emotional side, sometimes when you have something to lose you start performing in a different manner.

“We need to be very careful. We will see a Scotland team that can enjoy the 90 minutes.

“We will have to defend really well and stop the real threat of this Scottish side.”