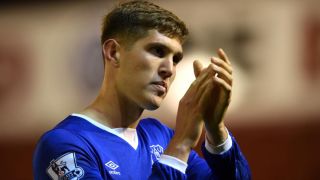 Roberto Martinez believes Everton defender John Stones has the potential to become one of England's finest footballers of all time.

Stones has sprung to prominence over the past two seasons, settling into regular Premier League action and earning senior international honours, while Everton withstood sustained attempts from Chelsea to take the former Barnsley player to Stamford Bridge.

But the 21-year-old's form has dipped of late and he was culpable for both Swansea City goals as the Premier League strugglers left Goodison Park with a 2-1 win on Sunday.

"John is 21, I think he's played 68 [65] games in the Premier League. I would never assess or judge a player until he's played 100 starts in any league," Martinez told a news conference.

"What I would say is John Stones has got an incredible potential, is still a young man and is in the right environment to develop that potential into becoming a very, very experienced footballer.

"Whatever the judgement from the outside, the criticism, we accept it. I think John Stones is in the perfect environment to fulfil that potential and become one of the greatest players England has ever seen.

"He is a young man who has been through a lot and some of his performances this season have been magnificent. Is he the finished article? Clearly not, because he is 21 and has played only 68 games."

Everton take a 2-1 lead to the Etihad Stadium but Martinez is keen for them to aim for a second-leg victory outright and seal a place at Wembley.

"We need to make sure that we play the game to try and win that football game in isolation," he added.

"I think you can only be thinking about the overall scoreline maybe when you are in the last five or 10 minutes of the game.

"I don't think you can go into an approach where you are keeping in mind what happened in the first leg because it is not a big enough margin to be thinking in that manner."