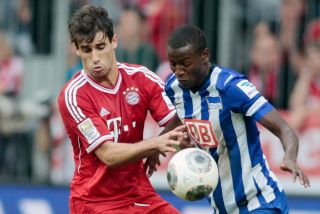 The Spain international had not featured for Pep Guardiola's side since their UEFA Super Cup victory over Chelsea in August due to a groin injury.

After nearly two months on the sidelines, he finally returned in Saturday's 3-2 victory at the Allianz Arena, replacing Thomas Muller in the 64th minute.

The 25-year-old is now aiming to improve his match fitness and push for a place in the starting line-up.

"I feel good and am very happy to be back with the team," he told the club's official website.

"I now need training to reach my top level as fast as possible."

Bayern also were boosted by the return of Toni Kroos, Arjen Robben and Dante to training on Monday.

Kroos and Robben were away from the first team working exclusively with fitness coach Andreas Kornmayer, while Dante continued his rehabilitation from an ankle injury.