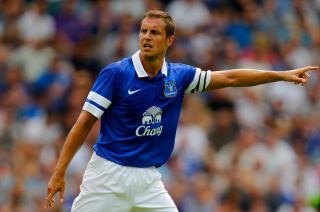 Distin picked up a suspected hamstring injury in Sunday's 2-0 victory over Manchester United at Goodison Park, and was replaced by Antolin Alcaraz at half-time.

The injury to the veteran Frenchman leaves Everton with just two recognised centre-backs available, in the form of Alcaraz and John Stones.

Jagielka - who too has a hamstring problem - has not featured since Everton were defeated 1-0 at Chelsea in February, and there have been suggestions the England international may be brought back into contention.

However, Martinez will take no risks with his captain, and is willing to wait until the former Sheffield United defender is 100 per cent fit.

"Phil Jagielka has got his own programme and it is important that we follow that and we don't rush him back," he told the club's official website.

"He has been involved with the first team training now and that is a really good sign. We want Phil back as quick as we can but not because we have got an injury with Sylvain.

"We aren't going to rush and do the wrong things in his individual programme.

"Phil is going to be fully fit very soon and I do expect that he will probably be able to make the squad against Manchester City and that's always been the plan. I do believe that we will be able to reach that."

Everton are currently locked in a battle for the last UEFA Champions League spot in the Premier League.