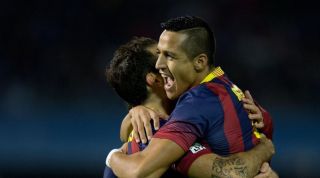 The Catalans took an early lead thanks to a goal from the in-form Alexis Sanchez - his seventh goal in his past six games for club and country - before two quick goals after the interval sealed the three points for the league leaders at the Estadio de Balaidos.

"On average, I think we deserved to win the match," Martino said.

"We just suffered a bit after our first goal because they (Celta) went into attack to face our defence.

"Despite that, Celta didn't go deep.

"They just had two chances outside the box and after that, in the second half, we managed to control the match much better.

"We scored two more goals quickly and we were better on the midfield."

Martino said left-back Adriano's withdrawal on the half-hour mark was precautionary only and that they would assess the defender's thigh injury in the next 24-48 hours.

Minus the Brazilian, the Spanish champions went on to consolidate their lead after the break and Martino said the two goals after half-time - one an own goal from Celta goalkeeper Yoel, the other from Cesc Fabregas - helped Barcelona relax.

"To be honest I think our victory was more comfortable in the second half because after 10 minutes we were winning 3-0," Martino said.

"It's true during the second half we managed easier to win the match than in the first half."

The Barcelona boss remained focused on his own side and not the fortunes of title rivals Atletico and Real Madrid - as they went four points clear at the helm of the Spanish top flight.

"To be honest I am thinking about ourselves and the results we get," he said.

"It doesn't matter when we play because we have to win anytime.

"It doesn't matter if we play before Real Madrid, at the same time or after them, we have to win.

"When one wins, they can wait with more serenity but we have to think about ourselves."