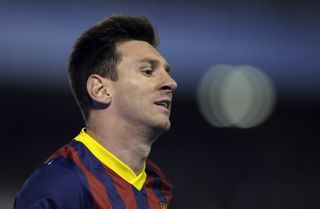 The Argentina international has added just one to his tally in four matches since returning from a thigh injury.

But Martino insists that Messi is judged by higher standards than anyone else, meaning even a small run without a goal is made out to be something much worse.

And he has backed the current holder of the Ballon d'Or to get on the scoresheet again soon, praising his mental strength.

"With Leo, he is expected to score goals in every game and if he he doesn't score every game then people say he has problems," Martino said.

"He played very well against Celta and just because of circumstances he didn't score. It is not a crisis, it is just what happens but I don't understand why people think Messi has these problems.

"Leo is a player who is very strong mentally. Being number one in the world for such a long time, it doesn't happen to (just) anybody. I don't think he is concerned if he goes one, two three games without scoring. Maybe tomorrow (on Friday against Espanyol) he will score three or four goals.

"A bad game for Messi is always going to produce something good for the team. What we want is to be at his best physically."

Much has been made of perceived tactical adjustments made by Martino since taking over at the club, with defender Gerard Pique noting a more direct influence.

He believes his side can improve but warned of the dangers involved with comparing his team to that of former coach Pep Guardiola, who won 14 trophies between 2008-09 and 2011-12.

"We're always thinking that we can do things better," he continued. "We can finish chances better and we're always looking to improve.

"I hope that we can be at our best in a short time but I don't think we should be comparing this team with other eras. It seems illogical there should be a comparison between the best team in Barca history and this team because we are in a different era now.

"I'm satisfied with the results certainly and you always have to bear that in mind in football. But, at Barcelona you look at the results and the football being played.

"We can play better and we have a margin to improve. If we continue to get these results after three months and know we can improve then we can be optimistic in terms of the future."