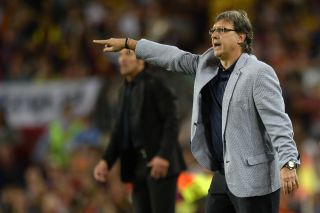 The La Liga champions claimed the Spanish Supercopa with an aggregate away goals victory over Atletico Madrid, after their two-leg tie finished 1-1.

The second leg on Wednesday was a scoreless stalemate, although Lionel Messi had the chance to win it outright with a late penalty - only for the Argentine to slam his spot kick into the crossbar.

And Martino, who only took charge of the team in the off-season, said it was a tense time as he oversaw his first piece of silverware coming into the Nou Camp cabinet.

"(The) first thing we wanted to do was win this cup," Martino said.

"Barcelona have won this trophy so many times but to me, I am a new coach (but) it wasn't the same to win or not to win.

"I lived (this match) with a lot of intensity, I took a breath after the match for a while to calm me down.

"I always try to be the same way because I think everything happening in football is because of the players."

Martino said new signing Neymar, making his first start for Barcelona, performed admirably, and he always wanted the starlet to play out the match to help improve his fitness.

"I think Neymar's performance was really good and I didn't realise at any moment of the match he was tired because he kept fighting he tried his best," Martino said.

"I wanted to change him and I wanted him to play 90 minutes and above all in a match with such an intensity."

Atletico boss Diego Simeone said he was proud of his squad for pushing 'the best team in the world' across the 180 minutes.

He added that he believed his side created more chances, although they were in vain.

"In a football match always there is contact (between players)," Simeone said.

"It is normal to have it because it is a game. I think the match was what we could have imagined from the two sides.

"There was a team (Barcelona), who have played the same way for a long time, and there was the other one, who is growing, who has humility, pride, courageous, and we knew how to play the match and that was good for trying our chances.

"I am pretty sure we created more chances than them but that does not count and the important thing is the finish."

Despite their promising performances against the domestic champions, Simeone does not envisage Atletico challenging for the league title anytime soon.

"Barcelona are better, Real Madrid are better, La Liga is going to be among them for a long time because of the economic power they have and what (TV rights) allow them.

"That keeps the rest of teams away for fighting to win La Liga. After that, in this kind of competition we have our chances but in a long league I don't think so at the moment.

"We need them to fail at the same time and that would be really difficult."