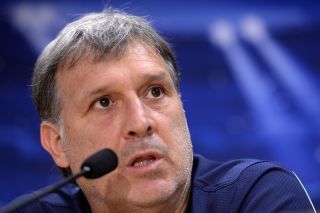 A Pedro hat-trick was followed up by a fourth from Cesc Fabregas late on as the Catalan giants cruised to a win that maintains their perfect record in La Liga so far this season.

And afterwards, Martino expressed his delight at the way his side came out after the break.

"I really liked the team in the second half," he said.

"We didn't have defensive errors and like the match against Ajax (in the UEFA Champions League in midweek), we improved over the course of the match. We have the capacity to score a lot of goals."

The coach also had praise for the performance of a determined Rayo side.

"Rayo's approach was very bold," he added. "They had an excellent approach, but we played better in the second half.

"They pressed us and made it very difficult to play short passes.

"We had the alternative to play long and at times you have to do this in these types of matches in order to reach other parts of the field."