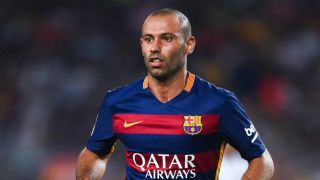 Barcelona defender Javier Mascherano has released a statement in which he says he has reached an agreement with Spanish authorities concerning charges of tax fraud.

The Argentina international appeared in court in an effort to avoid a custodial sentence being handed down as a result of two counts of tax evasion.

Mascherano had failed to declare earnings in 2011 and 2012 which amounted to €1.5million.

Reports emerged in Spain earlier on Thursday to suggest that Mascherano had been handed a year in prison and a significant fine but the former Liverpool man says an agreement has been reached with the Treasury which gives him "peace of mind".

He has also suggested he could pursue legal action himself against the firm which he claims gave him poor advice and which led to the case being opened.

An official statement from Mascherano, published on Barcelona's website, read: "I want to clarify some issues related to recent news about myself.

"As of today, I have reached an agreement with the Spanish tax authorities. As such, with the legal side resolved and with the confidence of having sorted my financial situation, I want to issue a short explanation.

"After agreeing to come to Barcelona, I hired a prestigious Spanish tax firm, with renowned professionals and an excellent reputation. In agreement with my situation, they recommended certain structures to me, all within the legal framework, always notifying me that the procedures were common, transparent and in accordance with the law.

"I was advised by said professionals from the year 2010 until 2014, when I decided to change firms before the process was opened against me and with evidence that my problem was no longer a possibility but a reality.

"My new advisors recommended I pay the taxes demanded by the Treasury, presenting what they called 'corrections'.

"Now, finally and following a bitter delay, we have reached this agreement, which restores to me the peace of mind of having fulfilled my obligations.

"I'm a professional sportsman, I don't have huge knowledge of tax or legal matters. As such, I lean on the people who handle these technical and, for me, complex terms.

"Throughout my career I've been an honest and responsible person, respecting my team-mates, the clubs for whom I have played and the countries where I have chosen to live.

"This situation I've had to go through has given me greater experience, from which I move on stronger and relaxed as I knew things were back in order.

"I reserve the possibility of taking action against those who made incorrect assessments and recommended things to me that were not correct."