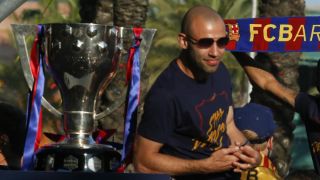 Juventus may have already signed Dani Alves from Barcelona but they should not expect Javier Mascherano to join in swapping Camp Nou for Turin.

Barcelona international sporting director Ariedo Braida said there was no chance that the former Liverpool midfielder would be joining Alves at Juventus, confirming the Argentina international is set to stay with his current employers.

"It is certain that Javier will not play for Juventus next season,” Braida told Rai.

The news means that Mascherano, 32, will play his seventh-straight season at Barcelona, where he will hope to add to his four La Liga titles and two Champions League medals.