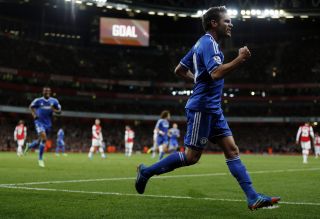 The Spain international was a crucial part of Chelsea's team during his first two seasons at the club after signing from Valencia in 2011, helping them to UEFA Champions League, FA Cup and Europa League glory.

However, Mata has started just four of the club's nine top-flight games this term as new boss Mourinho puts his own stamp on the team.

The 25-year-old came into the side and scored in Tuesday's 2-0 League Cup win at Arsenal, though, and has pledged to continue fighting for a regular starting berth.

"I am happy at Chelsea. I have always felt the support of the fans - in every game, on the street - I have felt the love from them. I try to play for them, score for them and make them happy. We have great support," Mata told talkSPORT.

"I want to play as much as I can, but if you want to win titles you need 24-25 players ready to play. Anyone can play any game.

"I always train my best and try to do my job the best I can. I have to be ready to play at my best at any time and that's what I do."