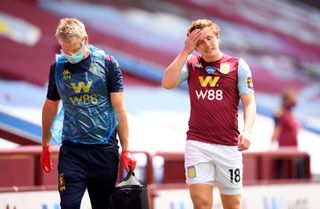 The full-back has missed the last two games with a hamstring injury, but is in contention for the Villa Park fixture.

Pepe Reina is also expected to start, despite complaining of a hamstring issue during Thursday’s defeat to Manchester United, but fellow goalkeeper Tom Heaton and striker Wesley (both knee) are long-term absentees.

Crystal Palace are without Gary Cahill for the rest of the season so he will miss this match against his former club.

The centre-half suffered a hamstring injury during the early stages of Tuesday’s 3-2 defeat to Chelsea.