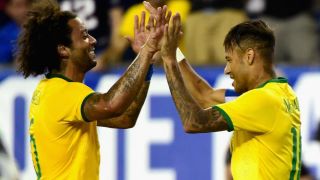 Real Madrid defender Marcelo said he wanted team-mate Cristiano Ronaldo to win the Ballon d'Or, but believes it is just a matter of time before Neymar takes out the coveted award.

Barcelona's Lionel Messi was awarded a record fifth Ballon d'Or on Monday, finishing ahead of Ronaldo and Neymar as the best player in the world for 2015.

Marcelo, who plays with Neymar in the Brazil national team, said it is just a case of when the 23-year-old wins the award.

"I think Messi and Cristiano are in a level above the other players and now Neymar proved he's in their level, it's a matter of time for him to win his own Ballon d'Or," he said.

"But I would have liked to give the prize to Cristiano because I see him working hard every day. He was competing with two great players, Messi and Neymar.

"Of course Barcelona's players wanted Neymar or Messi to win but I wanted Cristiano, because I see him working hard, he's my friend and I see his dedication daily."