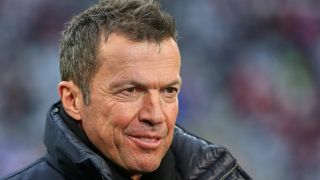 The 57-year-old, who captained West Germany to World Cup glory in Italy in 1990, thinks England win their quarter-final against Sweden on Saturday and overcome Croatia or Russia in the semi-finals to reach the showpiece in Moscow on July 15.

Matthaus lined up against England in the last four in Turin 28 years ago, where Bobby Robson's side lost in a penalty shoot-out.

No Three Lions team has advanced to a World Cup semi-final since, but Matthaus rates the chances of Southgate's men doing so.

"I expect Brazil versus England in the final, because France and Belgium are on the same side of the draw as Brazil and these teams will knock each other out," he told Bild.

"[England] have a young squad with a high culture of playing football, with a lot of speed and a great striker like Harry Kane. Their trust in their own abilities seems to be huge.

"The team is fearless and also benefits from the great coaches who work with them in the Premier League."