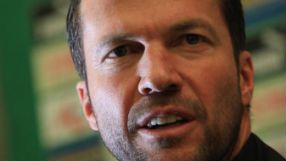 "I would like to make a great compliment to my team although we couldn't win," said Matthaus, who began the rebuilding process for Bulgaria after back-to-back defeats to England and Montenegro last September.

"We played really good in the first 60 or 70 minutes as it was the team's best period since I took over.

"We controlled the game, we're creating opportunities and scoring was the only thing we failed to do. We deserved to win."

England, who won 2-0 in Wales on Saturday, and Montenegro are joint top of qualifying Group G with 10 points from four games. Switzerland are third and Bulgaria fourth, both with four points from as many matches.

"There are so many young players in the team who played against Switzerland and I can see a bright future for them.

Matthaus included debutants Kostadin Stoyanov and Spas Delev in his much-changed starting line-up with Ivan Bandalovski, who has only made one appearance as substitution before, also starting the game.

"Unfortunately, we had little time to work together," said Germany's former World Cup-winning captain. "But I'm optimistic and I know we could be successful if we continue our hard work."

"I'm motivated to stay as Bulgaria coach for a long time and I want to achieve good results."

Matthaus, who enjoyed a winning start with a 1-0 victory in Wales in October, became Bulgaria's first foreign coach since Czech Rudolf Vytlacil left the job in 1966.

Bulgaria visit Montenegro on June 4, realising only win will keep their faint chances of reaching the finals co-hosted by Poland and Ukraine alive.